Minoan Lines is a Greek shipping company based in Crete. It was founded in Heraklion in 1972 and year after year it has grown becoming a reference point in international connections from Italy to Greece and in domestic routes from Piraeus to Crete and the Cyclades Islands. In 2008 it became part of the Grimaldi Lines Group, which holds 88% of the share capital.

All ships in the Minoan Lines fleet have international safety certifications on board to ensure a safe and reliable voyage for passengers. Among the most important are

In addition, all vessels are equipped with the most modern on-board safety and rescue equipment, as well as the most advanced fire-fighting systems.

Respect for the environement

Environmental respect is important for Minoan Lines, whose philosophy is based on international requirements such as those of the MARPOL convention. Minoan Lines holds ISO 14001 RINA certification for environmental management in passenger and vehicle transport at sea and all company processes are developed according to EN 9001.

Cleanliness and quality of raw materials

Minoan Lines does not neglect the importance of the cleanliness of its ships and the quality of the food and drinks served on board by carrying out continuous checks. Moreover, the Company is ISO 22000 HACCP certified.

The history of Minoan Lines

The origins of the Company

1972 - Minoan Lines was established in Crete with the formula of popular shareholding
1974 - The first ship, Minos, was bought  to connect Piraeus to Heraklion
1975 - The second ship, Ariadne, was bought to connecting daily Piraeus - Heraklion
1978 - With the third ship, named Knossos, the Company started the Piraeus - Chania line

A new adventure: ferries from Italy to Greece

1981 - By purchasing the ship "El Greco" Minoan Lines started the international line Ancona - Corfu - Igoumenitsa - Patras.minoan lines pennacchio fedra
1984/86 - After asserting itself on the market, Minoan Lines began to renew its fleet: the ferry "Festos" replaced the ferry "Minos" on the line Piraeus - Heraklion, while with FB "Agia Galini" was enhanced the transport of goods to Crete Island
1987 - FB "Fedra" was purchased to be used as second ferry on the line Ancona - Greece.
1988 - Another ship, the FB "King Minos", was bought to improve the Italy - Greece Lines, allowing the Company to have 5 departures per week and imposing the leadership on the market!

1989 - Inauguration of the summer line Ancona - Greece - Turkey operated by the ferry "Ariadne" (Corfu - Cephalonia - Piraeus - Paros - Samos - Kusadasi)
1991 - The fleet renewal process continued with the purchase of the modern ferry "Daedalus" in place of "El Greco" on the Ancona - Greece line.
1992 - The Company purchased the ferry boat "Erotokritos" to start new direct line to connect Ancona to Patras in only 24 hours! FB Erotokritos at that time was a very spacious ship compared to the others, both in terms of passengers and trucks transported.
1993 - A new plan of investment and restructuring was started to revise completely the lines and the fleet by building new and modern ships.

Market Leader in ferries to Greece

1994 - Minoan Lines inaugurated the new headquarters in Heraklion
1995/96 - The new line Venice - Corfu - Igoumenitsa - Patrasso was started.
1995 - FB "Aretousa" entered the fleet. It was the first ferry built for Minoan Lines, with very high standards and speed. Ancona to Patras was covered in only 22 hours
1997 - The Venice line became daily
1998 - The new and beautiful sister ships "Ikarus" and "Pasiphae" entered the fleet becoming the flagships of the Company, and for the first time showing the brand "Highspeed".

1999 - It took place a further plan for renewing the fleet. The new ferries "Knossos Palace" and "Festos Palace" were bought. They are operating on the Piraeus - Heraklion line since 2001.
2002/2003 - the modern and beautiful sister ships "Olympia Palace" and "Europa Palace", were bought.
2009 - Minoan Lines Company was taken over by Grimaldi Lines who revised the lines and the fleet. Two years later the huge and wonderful flagship sisters "Cruise Europa" and "Cruise Olympia" entered the Ancona - Igoumenitsa - Patras line.
2012 - The bi-weekly line Trieste - Igoumenitsa - Patras is started.
2017 - The line Trieste - Greece becomes Venice - Igoumenitsa - Patras (via Ancona) operated twice a week. 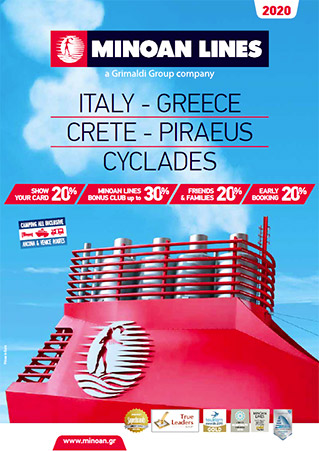