In-depth information, curiosities and stories about your travel destinations

Ancona: the ancient gateway to the East

A trip to the capital city of the Marche region

If you have to leave by ferry from the port of Ancona, do not miss the chance to visit this beautiful city overlooking the Adriatic Sea. Below we give you some useful hints and suggestions about the many attractions in the area

Ancona with its over 100,000 inhabitants is the capital city of the Marche region and is an important Italian port, the most important in the Adriatic Sea in terms of passengers transported. It rises in a characteristic position on an elbow-shaped promontory projected towards the sea. Precisely from its particular geographical shape derives the name of the city chosen by the Greek founders "Ankon" which in ancient Greek means elbow. When you reach Ancona coming from the north, it is impossible not to be enchanted by the beauty of its historical centre dominated by the Cathedral which elegantly overlooks the sea.

Ancona has behind it centuries and centuries of history and domination closely linked to the sea and the geographical importance of its natural port which has always been a strategic point for the trade with the East.
It was founded by the Greek Dorians of Syracuse in the 4th century B.C. who chose it for its position and for the control of the naval routes towards the northern Adriatic Sea. It was precisely from its founders that Ancona took the name of "Doric city", a name still used today to define the inhabitants of Ancona, often called "Dorici".
In the first century B.C. it became a colony and an important port of the Roman Empire, which promoted the expansion of the sea port under Emperor Trajan. In the following centuries it was first a Maritime Republic, then a city of the Papal State, then a Republic of the Italian Napoleonic Kingdom and finally in 1860 it entered the Kingdom of Italy.
In the historical centre of Ancona you can find numerous historical testimonies of its past.

What to see in Ancona: the ancient part of the city

If you're waiting to embark on the ferry to Greece, a walk from the port to the city will take you to all the main monuments and attractions within easy reach.
Starting on foot from the area near the maritime station and the characteristic Rione degli Archi you will find the Mole Vanvitelliana and the imposing arch of Porta Pia, historical gateway to the city. Continuing along the long port you will find the Church of S. Agostino and the Church del Sacramento which overlooks the sea and the square in front of the Teatro delle Muse with its beautiful façade. From here you can continue on to the seafront visiting the splendid Palazzo della Loggia dei Mercanti and the Church of Santa Maria della Piazza and continuing straight on towards the ancient port dominated by the Triumphal Arch of Traiano and the Arch of Clementino. The walk inside the port can continue for about one kilometre until you reach the red lantern, the entrance door for all naval traffic. From the old port area you can walk or take a lift up the Guasco hill, the historical centre of Ancona dominated by the Cathedral of San Ciriaco with an incredible view of the Gulf of Ancona. Going down from the hill you will find the Roman Amphitheatre (with a short diversion you can visit the Cardeto park with wonderful views of the sea), the Palazzo del Senato, the Church of SS. Pellegrino and Teresa, Palazzo Ferretti, seat of the National Archaeological Museum of the Marches, the imposing Palazzo degli Anziani, the Church of the Santissimo Nome di Gesù and then stop for a coffee on the beautiful Piazza San Francesco overlooking the beautiful Church of San Francesco alle Scale. Continuing on you will find yourself on the real city lounge: Piazza del Plebiscito called Piazza del Papa by the inhabitants due to the presence of the statue of Pope Clement XII. If you have time you can get lost in the many alleys and lanes that make up the urban fabric of the historic centre, you will be surprised by elegant buildings and numerous testimonies of the past difficult to list in a single article.

From Piazza del Papa you can finish your walk or you can decide to go on to the most modern (but no less beautiful) part of the city cutting the historical centre from sea to sea crossing first Corso Giuseppe Garibaldi and then Viale della Vittoria. Ancona rises on a sort of peninsula and is the only place in Italy where you can see the sun rising and setting over the sea. Halfway along you will find the elegant Piazza Cavour, followed by the Town Hall and the Post Office building. After one kilometre you will arrive in one of the most beautiful areas of the whole city: the Passetto with its Monument ai Caduti which culminates in the staircase leading to an urban beach famous above all for the access to the Passetto Caves, a real peculiarity of Ancona.

The favourite shopping area for people from Ancona is located in the centre between Corso Garibaldi and Corso Mazzini, where you will find a large number of shops for all tastes and needs.
Shopping centre lovers will find many superstores of the most famous brands in the southern suburbs of the city, also known as Baraccola which is just a few minutes drive from the centre.

Ancona is a medium-sized city that lacks nothing: there are several cinemas, theatres and museums in the historic centre and on the outskirts.
The nightlife takes shape especially in the central Piazza del Plebiscito and in the narrow streets of the city centre which are full of all kinds of clubs from pubs to disco bars.
Among the most important events organized are the famous Fair of San Ciriaco (patron saint of the city) which welcomes visitors from all over the Marche region, the Festival Del Mare, where the Madonna del Mare, particularly dear to fishermen, is celebrated with a procession of boats in the port.

If you have one or more days at your disposal you can be inspired by the beautiful surroundings of Ancona, all of which can be reached by car or public transport. Among the most evocative places we surely remember the Riviera del Conero with its dream landscapes like the bay of Portonovo or the beaches of the picturesque villages of Sirolo and Numana; the Basilica di Loreto, pilgrimage destination from all over the world, Recanati, the birthplace of the poet Giacomo Leopardi, the Frasassi Caves and other cities of art like Senigallia, Osimo, Jesi. 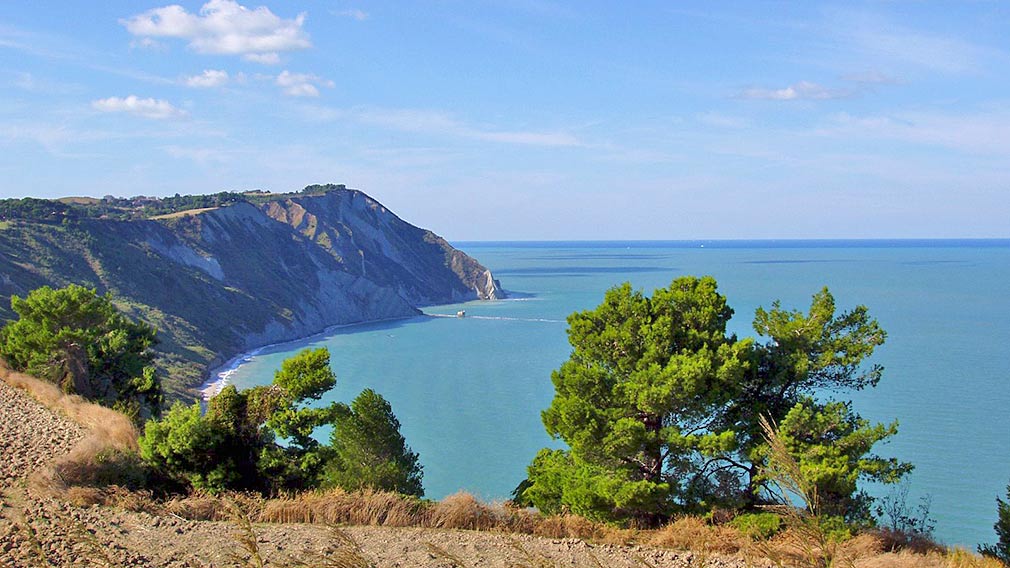 The cuisine of Ancona takes up many of the typical characteristics of the gastronomy of the Marche region, but adds a number of peculiar ingredients, especially related to seafood and fishing. Below we propose you some of them.
Among the most famous seafood dishes you can try the stockfish all'anconetana fine dish that needs a long cooking, the moscioli of portonovo, the D.O.P. mussels fished in the homonymous bay and cooked in a variety of ways by themselves or as a condiment for pasta, the bombetti in porchetta (the condiment in porchetta is made with oil, tomato, garlic and wild fennel) and the crocette in porchetta.
Among the first courses we remind you the traditional vincisgrassi, a variant rich in ingredients of the most famous lasagne, spaghetti with mussels, pasta alla pescatora, ciavattoni allo scoglio (particularly large rigatoni served with tomato and seafood).
Among the second courses we recommend the famous brodetto all'anconetana, a fish soup with local seafood, sardoncini scottadito, cuttlefish with peas, grilled and fried fresh fish from the Adriatic. We recommend you also try the paccasassi, also known as sea fennel, are small green shrubs that grow among the rocks near the sea and are harvested and put in oil.
Finally, among the desserts, the ciambellone is very popular, whether empty or filled with cream or chocolate or sultanas, the maritozzi and the ciambelle di mosto.

The wine of Ancona par excellence is undoubtedly the Rosso Conero, a full-bodied wine produced in the whole area of the homonymous mountain and composed of a mix of Montepulciano and Sangiovese grapes. There are many wineries immersed in the vineyards that are waiting for you for guided tours and tastings. In the immediate surroundings of Ancona are produced other famous red wines such as Lacrima di Morro D'Alba and Rosso Piceno, and white wines such as Verdicchio dei Castelli di Jesi and Verdicchio di Matelica.

Make sure you enter all the required information, indicated by an asterisk (*). HTML code is not allowed.